It’s been seven months since I was humbled to see my name at the top of the voting for Virginia Conference lay delegates to the 2016 United Methodist General Conference. Having somehow survived the two previous General Conferences and my years of the Conference staff, I knew what that vote entailed. Being a delegate alone calls you to a level of stress and politics in the church that leaves you with a multitude of questions and need for spiritual direction, possibly even serious therapy. But this was the year for the first elected lay person to chair the delegation.  It would not only mean leading the delegation, but also service on the Annual Conference and jurisdictional Committees on the Episcopacy. In simple terms, it means a lot of extra work.

God and I struggled mightily after my General and Jurisdictional Conference experiences in 2008 – to the point where I had pretty much decided that I had no desire to ever return to future conferences. A Spiritual Director was called in to intervene in the months that followed.

God and I had another time of wrestling in 2011.  Many voices were sent to encourage me to do this General/Jurisdictional Conference thing one more time.  God won despite much more hesitancy on my part to listen.  After the 2012 Conferences, a Leadership Coach had to assist in the intervention.

The word that I heard that God sent in 2015 through a multitude of people was “If not you, who?”  My response was to try to ignore those voices, but God won big this time.  I know that others have heard the same question but for the much larger challenge in the denomination today of serving as Bishop. My first meeting with a new Spiritual Director is next week; it’s got to happen before General Conference this time around.

Today, seven months after the first election of lay delegates, I’m stuck in Portland following the General Conference Briefing. Hopefully I’ll get home tomorrow, but I’m not going to be surprised if I hear soon that the flights have been cancelled. God has a wicked sense of humor.

There were a number of questions that I’ve pondered on this trip.

What if we just choose to believe?  I think that’s the answer to all the questions. 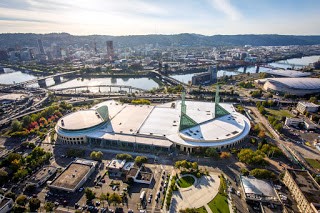 View all posts by Martha Stokes